Where Sherwood Rise begins and ends is open to debate. To most however the area starts at the Gregory Boulevard traffic island and finishes at the Djanogly City Academy  at the brow of the hill. Sherwood Rise encompasses the streets immediately either side, including a small parade of shops on Beech Avenue.

Property in Sherwood Rise is mixed, with the majority being larger Victorian or Edwardian houses, with some split into flats. There is a scattering of newer build maisonettes, and smaller properties built in the 1970's & 80's, alongside some fine examples of property built by Victorian architect Fothergill Watson. 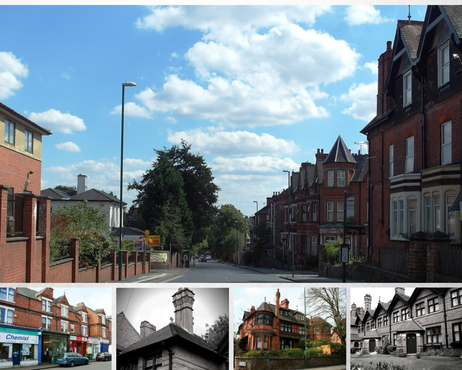 Sherwood Rise & Carrington is home to the Clarendon campus of New College Nottingham, and there is also an Open University regional hub based on the site of the old Carrington Train Station that was demolished in the 1980's.